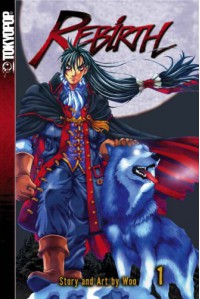 Volume One covers the battle between the formerly allies, Deshwitat and Kalutika, and culminates with Kalutika murdering Deshwitat's fiancee Lilith before sealing Deshwitat in stasis. During his 'slumber' Deshwitat comes to the realisation that his own Dark magic is insufficient to defeat the Light magic of Kalutika. Some 300 years later, Deshwitat is released from stasis by an inept band of spiritual investigators who are battling a band of demons. When one of the two survivors, an exorcist named Millinear Shephild, uses her Light magic on Deshwitat while fighting the demons he resolves to have her teach him Light magic so he can take his revenge on Kalutika.


Reviewing this book after re-reading it since joining GoodReads.