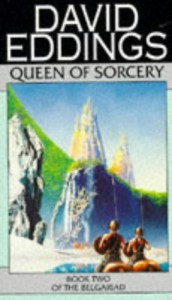 Queen of Sorcery is book two of the 'Belgariad' series, and chronicles the continued adventure of Garion and his companions through the richly detailed world created by David Eddings (with uncredited help from his wife).

Picking up shortly after events in Pawn of Prophecy, this book, as the group journeys into the the three southern states of the 'Kingdoms of the West' on their quest to retrieve a stolen magical item that holds the potential to either destroy the world or save it (depending on whether it is wielded by the force of evil or good, respectively).

The cast increases in size as more people are added to the travelling party ('fellowship'?) as 'instructed' by an obscure prophecy that could hold the key to the success, or failure, of the adventure.

The existing characters are developed further, the rich detail of the world becomes more and more apparent as Eddings strives to pull the reader into his vision of 'Epic Fantasy'.

I decided to go back and re-read (and review) this book (and series) as it was a much read and loved favourite from my teen years. I probably read and re-read this series more than a dozen times between it's release and my 21st birthday, and it is probably one of the primary reasons for my love of the epic/high fantasy genre.